Spring has sprung, and it seems the Carmel Indiana housing market is heading into full bloom! Overall, the Carmel Indiana housing market report for March 2012 shows reason for optimism as numbers improved almost across the board. Although Closed Sales dropped 6.83% for the month of March 2012 as compared to the previous year, Median Sales Price, Average Sales Price, and Percentage of List Price were all up.  More good news is that Average Days on the market decreased 5.9% to 112. 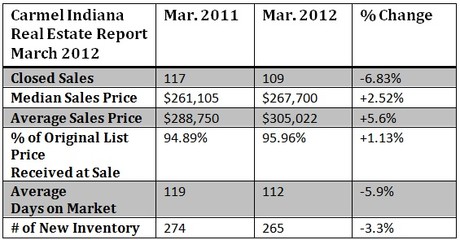 As for the Hamilton County housing market report for March 2012, it was a bit of a mixed bag.  Although Closed Sales were strong (+13.9%) and Months Supply of Inventory decreased substantially (-17.4%) to 7.1 months, other categories didn't fare so well. 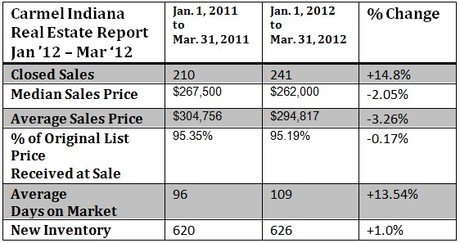 That's in contrast to the March 2012 housing market report for all of Central Indiana, which was BOOMING! Pending sales were up 14.5% in the first quarter of 2012 and up 8.6 percent in March alone. Closed Sales were also strong, up 18.3% for the quarter and 10.1% percent in March. Months Supply of Inventory was down 15.8 percent for the quarter to 7.8 months.

Both home prices and home sales are expected to increase across the country this year.  A decreasing inventory of bank owned properties and a lack of new construction means rental prices will be rising, making buying a more affordable option, according to Lawrence Yun, chief economist for the National Association of REALTORS.

Check back next month to see what the numbers add up to for the Carmel Indiana housing market report! And search here for all Carmel homes for sale.