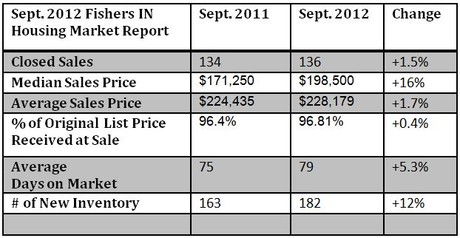 The Fishers Housing Market Report for September 2012 had me checking and rechecking the numbers. Across the board gains? That hasn't happened since... well, not for a long time.

The Median Sales Price for Fishers homes jumped 16 percent in September as compared to September 2011 - to $198,500. Average Sales Price, Closed Sales and Percentage of List Price Received at Sale also showed gains. It wasn't a complete victory, since Average Days on Market increased by 4 days, to 79. But otherwise, September was a very good month for the Fishers housing market.

In a comparison of July through September sales to the same time period in 2011, Median Sales Price and Average Sales Price declined slightly (-2.5 percent and -3.6 percent, respectively) but gains were made in all other categories.

Fishers fared better than the Carmel housing market and Hamilton County as a whole for the month of September. Both saw Median Sales Price and Average Sales price drop.

Learn more about living in Fishers Indiana, #12 on CNN Money's Best Places to Live in America!

Fishers is not experiencing the low inventory we are seeing in Carmel.