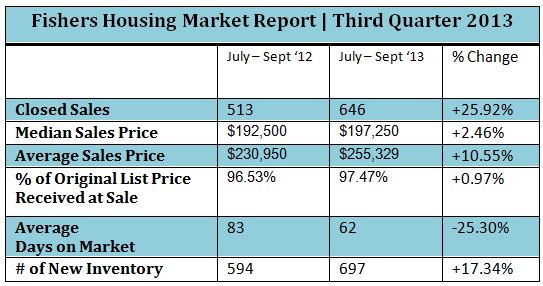 How can it be that we're already studying the stats for the Fishers Housing Market Report for the Third Quarter of 2013? This year is flying by!

According to the numbers....

Fishers Housing Market Third Quarter numbers show a market that continues to be on the upswing, with noteworthy jumps in Closed Sales and Average Sales Price and consistent gains in all other categories as compared to the same 3-month period a year ago. While Closed Sales slowed overall in Central Indiana for the month of September, there was no sign of a slowdown in Fishers (+28.14 percent). Average Days on the Market continue to drop both in the quarter and in a monthly comparison. Search ALL homes for sale in Fishers IN.

According to the experts....

While the pace of growth in Central Indiana as a whole has slowed some, it's still healthy. “Fall usually brings a slowdown to housing markets and while September followed that seasonal trend, home sales and prices across Indiana were significantly higher than the same month of the last two years. Statewide, we are well past the recovery stage and appear to be moving toward a stable, balanced marketplace. Whether we fully achieve that status depends on real employment and wage growth, as well as consumer confidence," says Kevin Kirkpatrick, 2013 President of the Indiana Association of REALTORS®

Check back next month for the first Fishers Housing Market Report of the last quarter of 2013!