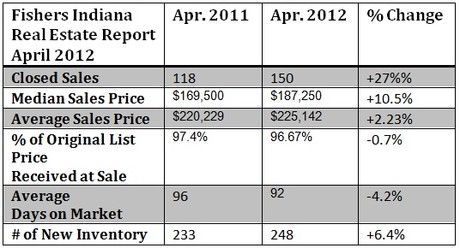 April 2012 was a very, very good month for the Fishers Indiana housing market. When comparing sales statistics from the month of April 2012 to the month of April 2011, gains were made in every category but one - Percentage of List Price Received at Sale. But really, in the scheme of things, a mere 0.7% decrease in Percentage of List Price Received at Sale is more than made up for by the encouraging news in other categories.

The 3-month Fishers Housing Market Report for February to April 2012 is also good news. Compared to the same time period a year earlier, only Average Sales Price showed a loss (-3.3%).

Could it be that forecasters are correct in predicting the housing market will begin recovery this year? The latest Fishers statistics seem to say it could be true. Check back next month to see if the good news continues into May 2012!