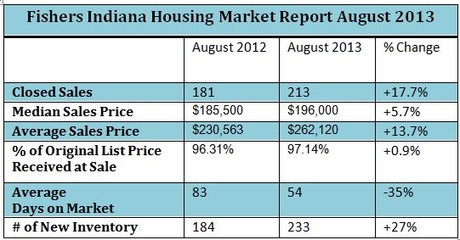 Search all homes for sale in Fishers, Indiana

Closed Sales may have slowed some as we head toward the end of the year, but the good news for sellers is that Fishers sales prices showed nice gains in August 2013 as well as over the past three months, while Average Days on the Market dropped sharply, to just 59.  Months Supply of Inventory throughout Hamilton County is currently at a very low 4 months; however the number of new homes on the market has been increasing steadily over the past three months which means sellers may not benefit from an inventory shortage indefinitely.

Find out what your Fishers home is worth. Request a free home value estimate.

The most expensive home sold in Fishers in August 2013 was a 14,895 Geist waterfront property on Brooks School Road that closed at $3 million. Originally listed at $3.5 million, the home sits on 7 acres and includes a poolhouse, conference room and two master suites. This home spent 304 days on the market.