Ugh! seems like the appropriate interjection for the December 2011 Fishers Indiana housing market report. When compared to the month of December 2010, numbers for Fishers real estate in December 2011 were disappointing in most categories. Closed Sales, Median Sales Price,and Average Sales Price were all down from the same time frame a year ago. Median Sales Price - the price at which half the homes that closed sold for more and half sold for less - was down noticeably at -14.5%. On the bright side, Average Days on the Market remained virtually unchanged, New Inventory decreased by 20% compared to a year ago, and the Percent of Original List Price Received at Sale was up ever so slightly. 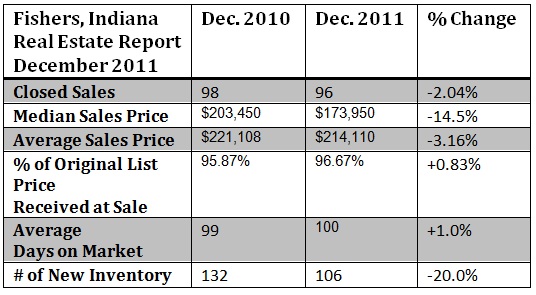 So what does it all mean? If you're a buyer, it's great news. There are still plenty of great deals to be found, and interest rates are predicted to stay super low for quite a while, which just makes a great deal an even better deal!

And if you're considering selling your Fishers Indiana home, don't despair!  January 2012 seems to have started off with a bang for the Fishers Indiana housing market and it seems possible things are turning around. Check back next month to see if this prediction comes true!

So that's it for the Fishers Indiana housing market report for December 2011. With this report we can (finally!) put 2011 real estate numbers behind us. Yeah to that!

I predict the housing market to drop more due to unemployment rate, forclsoures, and people over all scared to buy or make major purchases