The Fishers Indiana housing market report for February 2012 continues what has been a good start to the year for Fishers real estate. When comparing February 2012 Closed Sales statistics to those for February 2011, every category showed improvement, with the exception of Average Sales Price (-5%).  Even Average Days on Market improved, dropping 5% from 100 days to 95 days. That hasn't happened in a long time!

A month-over-month comparison of December 2011 through February 2012 to the same time period for the previous year brought slightly more encouraging news than did the January 2012 Fishers housing market report. Closed Sales and Percentage of List Price Received at Sale were both up. Unfortunately, Median Sales Price and Average Sales Price were down, and Average Days on Market increased from 99 to 107.

National and local experts continue to predict the housing market will begin its turn-around this year, as interest rates remain low and home prices stabilize. Hamilton County real estate as a whole reflected that prediction for the month of February 2012, with gains in most categories compared to a year ago, including New Listings (+27.5%), Closed Sales (+13.5%), and Median Sales Price (+3.3%). Supply of Inventory dropped to 7 months in February 2012, which is approaching a neutral market that favors neither buyer nor seller.

Check back next month to find out if the Fishers housing market continues to improve in 2012! 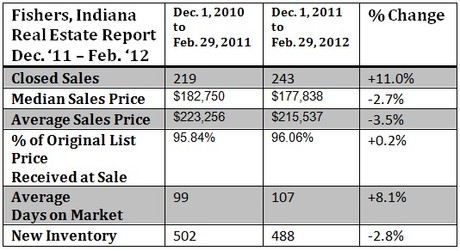 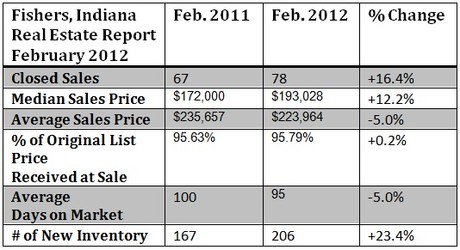