Fishers Indiana Housing Market Report June 2013 – Closed sales continue to soar in the Fishers housing market - up 20 percent as compared to June 2012 and up 28 percent for the three months ending in June - but the supply of new homes on the market is struggling to keep up which means it's still a seller's market out there.

See all homes for sale in Fishers, Indiana. 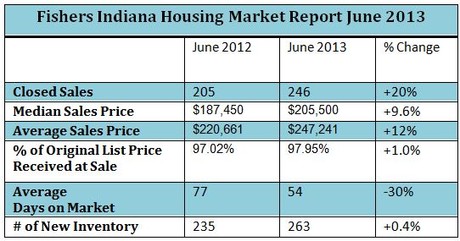 The June 2013 Fishers Housing Market Report shows that sellers are also benefitting from the current market in the way of rising sales prices and declining days on the market as compared to June 2012.

Whether or not this trend can withstand spiking interest rates is yet to be determined. Experts predict that while some buyers may push hard to find a home before interest rates rise further, others may decide to wait to see if interest rates fall again before writing a contract. Based on recent activity in Fishers and surrounding areas, it seems likely that, for the next few months anyway, most buyers will opt for finding a home while they can still lock down a historically very, very low rate.

If you are considering selling your Fishers home, now is the time while inventory and interest rates remain relatively low. Start by finding out what your home is worth with a free home value estimate.

The most expensive home sold in Fishers in June 2013 was a 10,120 square foot French country mansion on Cumberland Road. The home was part of a working farm complete with a pond, horse stables and pasture land. This home was not an easy sell. Originally listed at $3.3 million, it spent more than four years and ended up selling for $2.6 million.

This sure tells the story for Hamilton County. Those investors scooped up the inventory and now there is not much to see.